From Bubbles to Blisters: Our MD’s Fundraising Journey 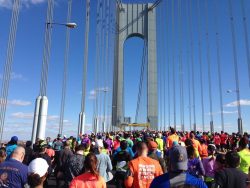 The team at Rivendell have been incredibly busy as of late. Supplying and fitting carpet and flooring to homes and commercial environments across the Bristol and Bath areas.

But that’s not all; because it seems we’re pretty great at fundraising too. Or at least our fabulous MD, Mandy Risso, is.

Not only has she recently held a fantastic Speak Easy Fundraising event but has even jetted off to New York City to run a gruelling Marathon.

It all started back on Boxing Day 2013 when, after a few too many glasses of bubbles, Mandy vowed to start running. And, just five months later she completed her first official run; the Bristol 10K. But as Mandy says herself she likes “a cheeky challenge” and one medal simply wasn’t enough.

So, in September 2014 Mandy claimed her second medal in her first official Half Marathon. The following year another medal was obtained in the Great North Run. Then a couple of months later Mandy competed in The World’s Half Marathon.

Then came the big one. Aged 54 and 4 months our fabulous Mandy signed up to the New York City Full Marathon; her first and most likely only full run.

“Yes, training has been hard; yes, I have given up lots to prepare my body and mind for the marathon; yes, it’s going to hurt. But I am doing this to challenge myself and raise vital money for Parkinson’s UK and For Ethiopia”

We think it’s pretty clear that Mandy doesn’t do things by halves.

The New York City marathon is perhaps the world’s biggest and most popular with approximately 50,000 finishers in 2015 alone.

With the start line on Staten Island a cannon blast began the journey for Mandy and thousands of other first timers, regulars and, professional runners on 6th November 2016. Crossing the Verrazano-Narrows bridge participants ran 15 miles through Brooklyn and Queens before reaching the Queensboro Bridge back into Manhattan. Running another 7 miles through the sights of the East Side and The Bronx, Mandy and her fellow contenders finished their final stretch through the beautiful sights of Central Park.

So, after months, if not years, of training Mandy has completed her first full Marathon; and we couldn’t be prouder.

“New Yorkers were amazing and the noise as we ran was incredible. There was lots of music bands and people support all thrown in with amazing scenery and fantastic weather. The last three miles were very tough but the thought of Cosmopolitans and nachos kept me going.

“What a day – I feel so lucky to be able to do this and raise so much for great causes”.

And, if the marathon wasn’t enough, Mandy and the Rivendell team recently transported a host of guests back to the glitz, glamour, and gambling of “The Speak Easy of New York City” with a fantastically themed race night.

Attendees took part in betting on 8 races, all of which had been kindly and generously sponsored, for the chance to win. A 3 item auction was held with fantastic prizes up for grabs including, Lion King tickets with 2 train tickets to London and a website design build which was so popular bidding exceeded £1,000 before our fabulous donators at MediaTube offered up two websites at £1,100 each.

And as if that wasn’t enough there were also 50 balloons up for grabs each attached with a selection of raffles prizes including; Bristol City tickets, Bristol rugby tickets, spa day, cookery class, photoshoot, personal trainer, a meal for 4 at Fishers Restaurant plus many many more.

Supplied with a menu of burgers, chips, salad, brownies and of course bubbles all of our guests embraced the glamour of the 1920s and danced the hours away. Needless to say the evening was a success and helped Mandy immensely in her bid to raise £10,000.

With a target of £10,000 to reflect the commitment, hard training, and passion Mandy has given, she has already made an incredible headway to reaching that goal. However, she still needs your support to ensure each of her chosen charities receives a significant donation.

If you are able, please take a moment to donate whatever you can by simply visiting Mandy’s Virgin Giving page. For a bit more on her chosen charities have a read below.

In recognition of her Father’s illness and not only the impact on him but her wonderful Mum too, this is a charity close to Mandy’s heart. In fact, her parents request that the money raised goes directly to research to help prevent this affecting more families.

As a thank you to her wonderful neighbours, Sue and Dudley for their love and support over the years Mandy’s second charity is For Ethiopia.

Her neighbours, who set up For Ethiopia have helped changes the lives and make a hands on difference to so many children and young women who face struggles and life threatening situations on a daily basis. The aim is to raise enough money to refurbish a remote delivery unit.

A Big Thank You

We’d like to thank all of those who have already helped Mandy in her journey to fundraising staggering amounts and for their continued support and helping hands.

Here’s to the next race?!

We’re confident in our ability to provide a professional, quality flooring service to all of our customers, every single time, no matter what the size of the project. Don’t just take our word for it though, have a read through our case studies to find out what our customers have to say about their Rivendell experience.

Increasingly the modern office is open plan allowing more employees to be positioned in the same space, increased collaboration on work and more natural light around the office. However open… View Article

Let us help you